The much awaited 11th edition of the Dakart Biennale got off to great start with many local and international artists in attendance. Although the ceremony was largely carried out in French and many non-speakers like yours truly following the celebration either through an interpreter or just intuition.

The spoken word by the invited guests and key speakers might have been musical to some or utter torture to others but what we all were able to understand and indulge in was spoken by the most important speakers of the day— the artists and their magnificent, exquisite works of art.

The work that was showcased at the opening ceremony at the equally magnificent Grand Theatre was beautiful. The exhibition featured mainly Senegalese artists with both the young and old artists included. The work was very recent too from artists like Maodo Diang, Matos, Tita, Papi, leiKARA, Thia and others.

Papi and his artwork

I was particularly struck by portraits of Papi, a young artist from Senegal/Mauritania with an interesting connection to Kenya. Just when he had started telling me that one of the portraits there was one he had done of his mother, a phone call from Nairobi came. When we resumed our chat, the first thing he asked me was whether I was from Kenya and that he went to school there. 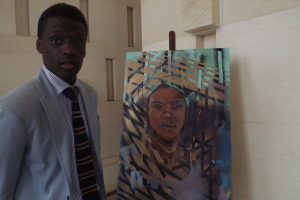 Papi and the portrait of his mother

It has been a while now since Mamadou Wane a.k.a. Papi left Brookhouse School, now famous in Kenya because of hosting the Presidential debates during the March 2013 elections, but he has continued to grow impressively and particularly with portraits.

“As a young artists, I have chosen to concentrate with portraits because people are attracted to human faces and hands,” Papi said as we chatted about his work. “I want to experiment with realism and gradually graduate to what will be a personal style.

Tita Mbaye was equally impressive with his work of art that pay homage to the African soldiers from Senegal, Mali, Chad, Burkina Faso etc., who took part in the Second World War. 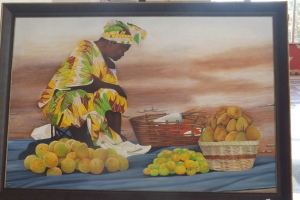 “I used natural ingredients “neb, neb” and glue from the baobab tree to create the leather like effect,” Tita told Kymsnet. “The piece tells a true African story.”

The Second World War has continued to inspire artists in all genres of art in French speaking Africa and Tita’s work is an indication that it is bound to continue for years to come.

There is plenty of artwork to see and artists to talk to with the opening of the international artists’ exhibition opening today and it has a many artists from the continent and the diaspora. This is complimented by the diverse and numerous the numerous Dak’Art Off exhibitions.