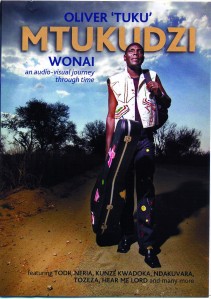 With close to 50 albums in his name, Oliver Mtukudzi or simply Tuku, continues to be one of the most prolific artist in Zimbabwe and indeed the entire continent. He has just added another feather- a DVD and CD called Wonai (please watch)– to his cap and there is no doubt that this is gong to raise his profile across the continent.

Wonai is an enchanting audio-visual journey through time and it is a must have for any African music lover. Initiated into the world of professional music in 1977 when he joined the now legendary Wagon Wheels which also featured Thomas Mapfumo another popular Zimbabwean crooner, Mtukudzi has grown gradually into one of the continent’s music icons and like good wine, he is getting better with time.

However, the musical bug had bitten him earlier than 1977. Born and raised inHarare’s Highfield section, in 1952, Mtukudzi grew up in a musical family. His parents both sang and actually met at a competition of church choirs. They continued to sing and compete amongst themselves (parents) and drew in the children as the judges.

Mtukudzi was, however, drawn to more than just judging. He was increasingly drawn to songwriting and had some early successes as a songwriter by penning some hymns that continue to be used inZimbabwechurches to-date.

This musical environment sharpened his musical mind and he brought all these qualities- zeal, desire to excel- in his professional life. It also instilled in him the keenness to pick out the goings-on, subtle issues and nuances in the community that formed the storylines in his songs.

However, it is not just the parental competition drew him to music. His father’s premature death propelled him (the eldest of seven children) to the fore as the family bread winner. From this experience, Mtukudzi developed a sense of social and economic responsibility early in life and this has informed his artistic ventures as a musician, film star or theatre.

“My lyrics have always been drawn from the people and day to day issues not just the difficulties but the humor, the happiness, the irony,” Mtukudzi said in an interview with Meron Tesfamichael inNew Yorkin 2003.

He added: “I may reflect more on those issues that touch me in some way but my lyrics tend to highlight people’s values and I guess I reinforce the more positive ones. I also like to challenge customs and behaviour that encourage greed and selfishness and I am conscious of the disparities in our society especially where women’s rights are concerned. As far asZimbabweis concerned, we are living in a very divisive society right now so these days I sing about the need for peace, unity and tolerance.”

This explains why his first single- Dzandimomotera, which he did immediately he turned professional, was such a hit that rapidly went gold. This was followed by Mtukudzi’s first album Ndipeiwo Zano, which was also a smash hit. Some of the musicians from the Wagon Wheels line-up teamed up with Mtukudzi to form the Black Spirits, the name of the band that has performed with him throughout most of his career save for a two year period towards the end of the eighties, when he performed with the Zig Zag Band.

When Zimbabwegot her independence in 1980, Mtukudzi and the Black Spirits released their fourth album Africa that was regarded as one of the most important albums of its time. Two tracks Zimbabwe and Mazongonyedze, were outstanding and with it the fledgling country founded one of its first great voices. FromIndependence to 1997, Mtukudzi released two albums every year, establishing himself as a producer, an arranger, a prolific song-writer and a formidable lead singer.

His prolificacy gave him an opportunity to experiment with their traditional forms of the mbira, the popular Zimbabwean music style called jiti, the traditional drumming patterns of his clan called katekwe, the South African mbaqanga style, and he gradually absorbed them into an art form which is now distinctly his own dubbed Tuku Music and with it, an enviable niche in the industry.

“My fans were the first to describe my music as Tuku Music but it was only around the mid 1990s that I began to develop it as a brand name,” Mtukudzi noted in an interview. My music doesn’t really qualify as one of the more classified styles of Zimbabwean music like jiti, sungura, chimurenga or even traditional.” 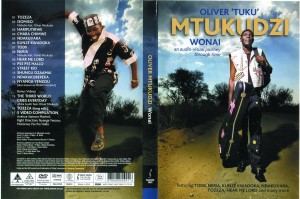 He has not only tried his hand in music, he was the lead character in the movies Jit and Neria that were major hits in Zimbabwe and the rest of the continent. In Neria, serious drama dealing with the thorny issue of women’s rights in a chauvinist world, Mtukudzi also wrote and arranged the soundtrack that earned him the coveted M-Net Best Soundtrack Award in 1992 against stiff competition that included that year’s other hit Sarafina by Mbongeni Ngema.

From film, Tuku turned his attention to drama by writing and directing the live musical production Was My Child, a project highlighting the plight ofZimbabwe’s street children. For this accomplishment, he was honoured by the Zimbabwe Writers’Union.

This aside, he continued to concentrate on his core business- music that took him beyondZimbabwe. In October 1993, Mtukudzi and group were invited to perform at the Natal Performing Arts Festival; in February 1994 they conducted a six-week tour of Austria and Switzerland; and in December 1994 performed ‘live’ on a double-bill with Lucky Dube in Pietermaritzburg, South Africa, which they followed up with a number of concerts in and around Cape Town the same year. He performed at the MASA Festival inAbidjanin 1997.

It is around this time that he decided to take control of every aspect of his career. He hired a consultant who helped him with his contract, revamp his business strategies and firmly established the Tuku Music brand. He invited his longtime friend and fellow artist Steve Dyer to help produce his first album under this brand and it was aptly titled thus, Tuku Music. It was a success that sort of re-launched him again to the world and he has not looked back since then. He has continued to release one album after the other and promoting around his brand around the world.

In 2000, he released Bvuma (Tolerance) his 39th album that created more than a few waves in the media when one of the tracks- Wasakara, was adopted by the opposition parties in Zimbabwe in the same way GidiGidi MajiMaji’s Unbwogable was picked by the then opposition in Kenya.

This was followed by other releases like Vunzhe Moto (Burning Ember), Shanda, a feature film documentary built around key songs that Oliver selected as being turning points in his career, Tsivo (Revenge), Bira Rekunze (The Other Side), Mtukudzi Collection 1985-1991, Mtukudzi Collection 1991- 1997, Nhava among others. He has released several others albums like Mahube- music from Southern Africa, Qhubeka (Moving Forward), with Steve Dyer under their regional outfit called Mahube.

The journey has been long and tortuous but very fulfilling and he has gone to almost every corner of the globe to take this message that has endeared him to Zimbabwean and the African continent. The journey is well captured in Wonai that will thrill. The 15 songs contained in the compilation that was released by Sheer Music, has some rare footage that presents Mtukudzi in different light.